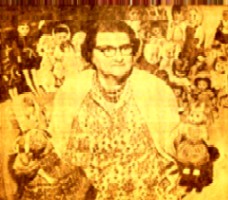 When I was 10 years old my grandmother, Myra Keith, showed me the newspaper article about my great-grandmother, Big Mama. At the time, I was impressed by her fame and importance. It was much later that I came to realize just how important her generosity was.

Like many elderly women of the time (the mid-60s), Big Mama had raised a family during the Depression and the Dust Bowl, and had come away from the experience with a mastery of frugal living, "making do", optimism, and generosity. In spite of never having much, she shared what she could, whether it was her time, her skills, or something "extra" she felt someone else needed more.

Sometimes it's difficult to imagine how the small contributions of a single individual can be important or significant. But when I think about the little girls who received the dolls from Big Mama, I wonder if for some, it may have been the first possession they ever had that wasn't a hand-me-down. And more than that, it was something that was made for them. How precious those dolls and their little wardrobes must have been.

I vowed to live by Big Mama's philosophy of sharing. The legacy of generosity described in Big Mamas newspaper article continues now with me, as well as the many other quilters who demonstrate over and over just how a big a difference individuals can make. 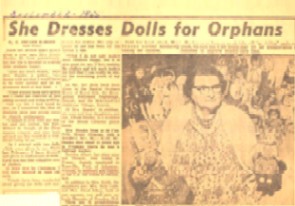 Since her severe heart attack about a year ago, Mrs. Emily Shanks, 68, lives precariously, but her life is devoted to making little orphans happy.

"After my heart attack," says Mrs. Shanks, a widow, "my doctor told me that I would have to be very careful and do no strenuous work of any kind.

"I had always been very active and I could not conceive of just sitting around and doing nothing.

"All my life I had loved to sew, so I conceived the idea of dressing dolls and giving them to church orphanages.

"I talked it over with my doctor and my pastor, the Rev. Wilbert D. Gough, of the First Baptist Church, and they both advised me this would be a wonderful thing to do.

"So I started with two dolls which were given to me. Since last February, I have dressed and given to orphanages 56 dolls. Each doll has four complete sets of clothes. 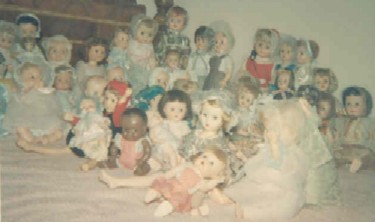 Dolls and wardrobes made for local orphans

"I hope that by Christmas I will have dressed at least 100 dolls.

"People have been wonderful about giving me dolls and materials for clothes. The only expense to me has been for the thread I use.

"What I do not only makes little children happy, but it is also good for me. I love making the clothes and the work makes me feel that I can really be useful the remaining years of my life.

So far, her dolls have been given to the Baptist Orphans Home of Royal Oak, the Evangelical Reformed Orphanage, Detroit, and the Methodist Children's Village, Detroit.

Of Mrs. Shanks 10 children, six sons and four daughters, one son, Albert (Luke) Shanks, is a member of the Mount Clemens police force.

Mrs. Shanks lives at 68 Canfield, Mount Clemens, with a daughter, Mrs. Myra Keith. Mr. Shanks died about 15 years ago in Wyoming where he was a railroad worker.

Besides Albert, her other sons are Thomas (Bud), who works in Fraser; Joseph, employed in Roseville; Paul, of Missouri; and James, in the U.S. Air Force in Omaha, Neb.

In addition to Mrs. Keith, the daughters are: Mrs. Bety Little and Mrs. Carol Lakey, both of San Antonio, Tex. and Mrs. Alberta Hamaty, of Camden, N.J.

She has never been on an airplane, but says that if her health continues to improve steadily she will "go visiting" again and may try air transportation to save time.