While not originally an Amish pattern, Jacob's Ladder may have appealed to Amish quilters because of its religious roots and the simplicity of the pattern, which allows for infinite opportunities for creativity and color play.

Originally, the block was made using two sharply contrasting colors, a dark and a light. The dark color was very, very dark, and the light color was very, very light. The pieces are arranged in such a way as to create diagonal patterns of light and dark across the block. When the blocks are joined together in an all-over manner (without sashing strips), the result is a series of ladders running up and down or diagonally across the entire quilt.

The Road to California -- the 2 colors of this variation are brighter than those used in the traditional version, and more characteristic of the western landscape. Identical in configuration to Jacobs Ladder, the blocks are joined without sashing to highlight the diagonals.

When a 3rd color is added to the structure, the pattern gets a new name - actually several names, depending on the geographic location. The names are reminiscent of places or actions. The diagonal formed by the squares of the 3rd color may be arranged so they either cross the line of the large triangles or run parallel to it.

Stepping Stones -- name of the pattern in New England and Virginia.

Tail of Benjamins Kite -- the name of the Stepping Stones pattern in Pennsylvania. 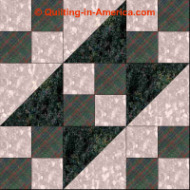 Underground Railroad -- the name of the Stepping Stones pattern west of Pennsylvania, in the region referred to as the Western Reserve after the Revolutionary War. 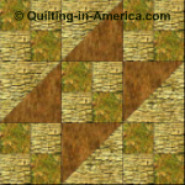 Trail of the Covered Wagon -- the name of the Stepping Stones pattern in Mississippi, the prairie states, and the Far`West.

Wagon Tracks -- another name of the Stepping Stones pattern in Mississippi, the prairie states, and the Far`West.

The Jacobs Ladder quilt block is a stunning example of geometry and color-play using a simple 9-patch design.