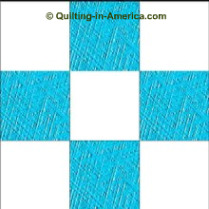 One of the earliest forms of patchwork, the nine-patch block involves joining nine squares of fabric to form a larger square. In it's simplest form, the block is constructed of nine  plain squares of fabric.

But the nine-patch lends itself easily to endless variation because each of the nine squares may also be made up of numerous smaller pieces sewn together.

One such variation is the Double Nine-Patch. The 9 squares that make up this block are each made up of smaller nine-patch blocks. 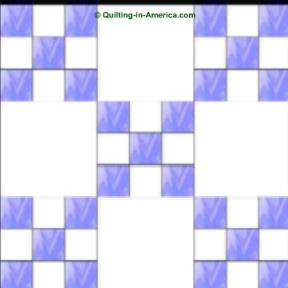 A quilt top made of Nine-Patch blocks, whether basic or complex, may vary from the very simple to extremely complex, both in the geometry as well as the color-play.

While the Nine-Patch is a very simple block, it is also a "block type" that describes the style of the construction. There are many, many Nine-Patch style quilt blocks.

A few examples are the