The Roman Square block is an example of a four-patch or nine-patch pattern in which rectangles are first pieced into squares, then those squares are pieced into blocks. Although this is one of the simplest forms of strip piecing, the many combinations of layouts makes it appealing for quilters of all levels. 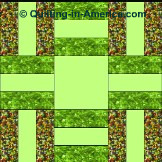 Also known as Roman Stripe or Fine Woven, this block is composed of small squares composed of light fabric sandwiched between two bands of a darker color. The squares are joined so the bands are alternately horizontal and vertical, surrounding a solid square in the middle -- elegantly simple and visually complex at the same time. 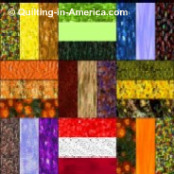 Other variations of this block include Beggars Blocks, which are also known as Cat and Mice, Basket Weave, Rail Fence, and Spirit of St. Louis.

Beggars Blocks are frequently done in 2 colors, often with white as the light colored areas. 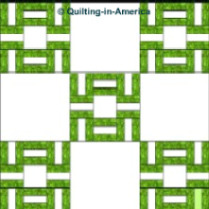 To make the quilt top, these blocks are then joined with alternating white blocks.

Cat and Mice is the name used for this block by the Amish and Pennsylvania Dutch.

Basket Weave is also a 2-color variation, but unlike Beggars Block, it is a 4-patch variation with half the squares being dark-light-dark and the other half light-dark-light. 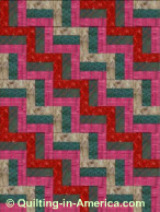 Rail Fence is a variation using Roman Square blocks in the layout whereby a "zig-zag" effect is achieved across the diagonal of the quilt.

Spirit of St. Louis is a 4-patch block that uses identical squares arranged in a pinwheel fashion so that clockwise from the center of the block, the same color rectangle faces right, then down, then left, and then up. When combined, the blocks form a series of light and dark pinwheels.