The history of quilts began long before European settlers arrived in the New World. People in nearly every part of the world had used padded fabrics for clothing, bedding, and even armor. With the arrival of the English and Dutch settlers in North America, quilting took on a new life and flourished.

The term "quilt" comes from the Latin culcita, meaning a stuffed sack.  The word has come to have 2 meanings. It is used as noun, meaning the 3-layer stitched bedcovering. It is also used as a verb, meaning the act of stitching through the 3 layers to hold them together.

A quilt is a cloth sandwich, with a top, which is usually the decorated part, a back, and a filler in the middle. Under the general term of patchwork are of 3 different types of quilts: (1) the plain or whole cloth quilt, (2) applique quilts, and (3) pieced or patchwork quilts.

The quilt, as we know it in America, was originally a strictly utilitarian article, born of the necessity of providing warm covers for beds. Quilts were also used as hangings for doors and windows that were not sealed well enough to keep out the cold. The earliest American quilts, made by English and Dutch settlers, were so intimately connected to everyday life of the early colonists that no record of them exists. 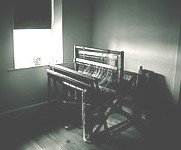 During the early years of American colonization, most Colonial women were busy spinning, weaving and sewing the clothes for their family, so had little time for artistic quilting. Commercial blankets or woven coverlets were more likely to be used, but during difficult times, when money was scarce or imported textiles limited, many Colonial women had to become creative in their use of materials on hand to keep their families warm during the cold seasons.

Quilting: The Art of Necessity

Those early settlers could not afford to simply discard things when they wore out; necessity required they carefully use their resources. Therefore, when blankets became worn, they were patched, combined with other blankets, or used as filler between other blankets. These were not carefully constructed heirlooms, rather they were functional items for the sole purpose of keeping people warm. Only in later years, when fabrics were being manufactured in America and were more affordable, freeing women from the work of making their own yarns and fabrics, did the more artistic type of quilting become more widespread.

In the 100 years between 1750 and 1850 thousands of quilts were pieced and patched, and many of them are preserved. Many of these quilts were so elaborate that years were spent making and quilting them. It is no wonder they are cherished as precious heirlooms and occupy honored places in homes and museums. Those early quilts provide a glimpse into the history of quilting as well as the history of the United States. 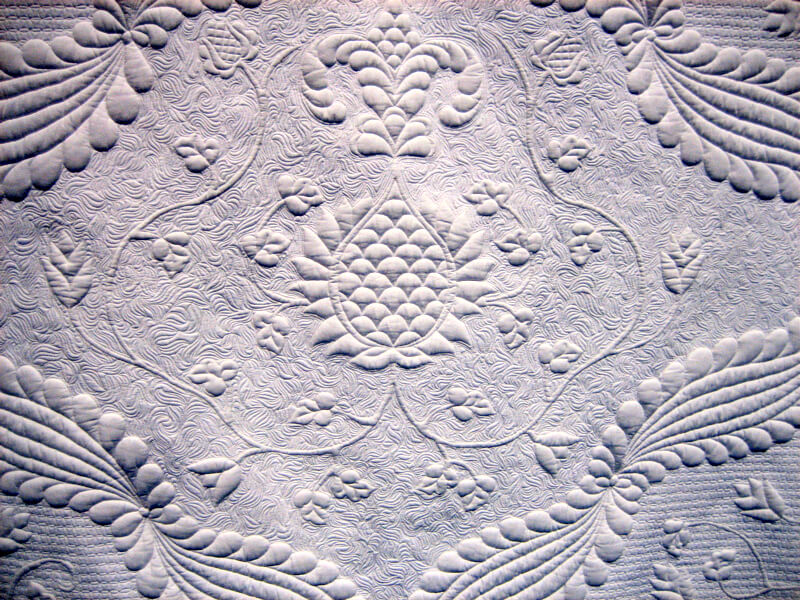 Whole cloth quilts, broderie perse and medallion quilts were popular styles of quilts made during the early 1800s. The whole cloth quilt, also known as counterpane, is usually made of single pieces of material on the top and back, and the decoration is obtained by means of padded or corded quilting in more or less elaborate design.

The applique quilt, or "laid-on" quilt, usually has a top made of whole cloth with smaller pieces of contrasting fabrics cut into shapes or forms that are applied or stitched down. These quilts were considered more elegant than the humble pieced type. Applique for quilting came into favor around the mid-1700s and reached its climax about 1850. Only the wealthy could afford the expensive imported fabric and had the leisure time for this type of quilt making that displayed the fine needlework of the maker.

The earliest settlers had no labor or materials to spare so they typically found the simplest, most expedient solutions to problems. This focus on functionality was exhibited in their architecture, tools and household furnishings, as well as political and social institutions. The block-style pieced quilt was an example of this functional approach to design. Once again, the history of quilts mirrored that of the developing country. 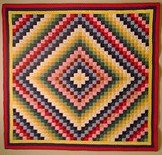 In the early 1700s Amish and Dutch colonists began settling in the rich farmlands of Pennsylvania and the Midwest. They emigrated from Europe with the hope that they would be able to have the freedom to live according to the principles of their religion. Those early pioneer women did not quilt, rather using the featherbeds traditionally used in Europe. Over time, with contact with outsiders combined with necessity, Amish women began creating quilts with the characteristic beauty and craftsmanship that are the hallmark of Amish quilts.

As the frontier was conquered, living conditions improved. With prosperity and the availability of more materials, quilts became less austere. The patchwork quilt was a "utility" quilt, in contrast to the applique quilt which was a "best" or show quilt, upon which time and material was lavished.

A particularly popular style of quilt in the early days of quilting (through the early 1800s), was the Medallion quilt, which was made in a style that had actually been brought to America from Europe by the colonists. This type of quilt -- a central motif surrounded by multiple borders -- offered endless design possibilities for quilters, who could use patchwork, applique, embroidery, either alone or in combination. 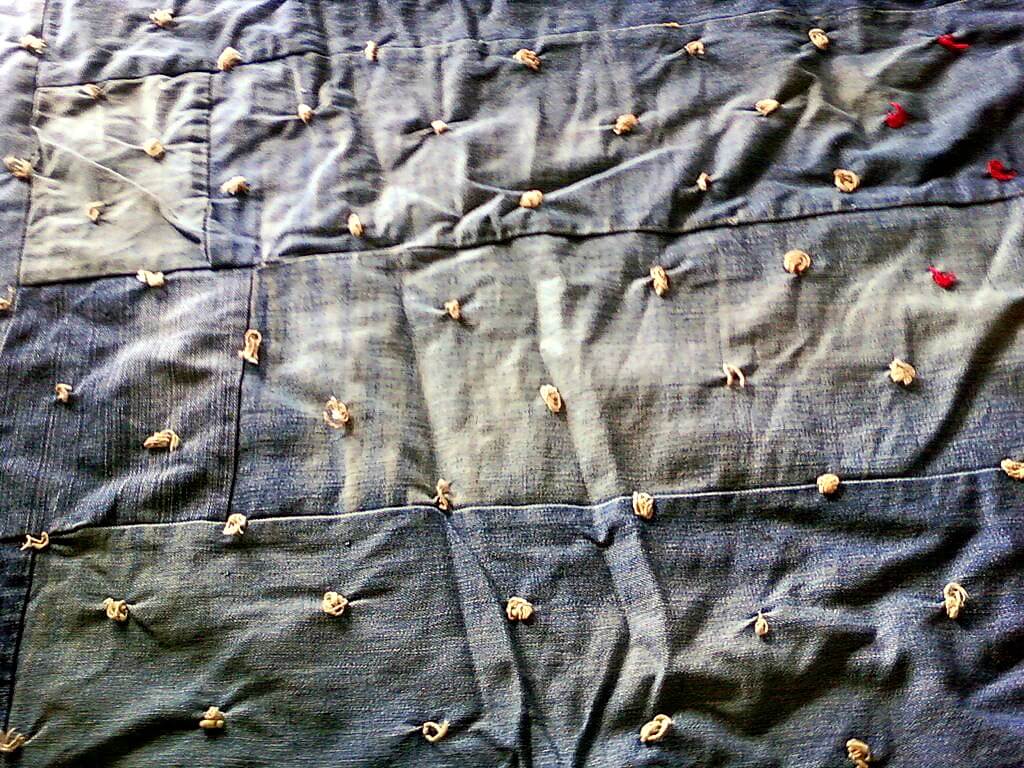 A variation of the utility quilt was the plain "tufted" quilt that is tied through in enough places to keep the filling from shifting and bunching. While a tufted quilt has no stitching holding the layers together, it does have the typical three layers seen in traditional quilts.

Another variation of the quilt is the "summer" quilt, which does not have the middle filling, so is useful as a bedcover during the warmer months. The summer quilt does have the traditional stitching holding the two layers together.

Many hands quilting a quilt

Members of rural communities frequently joined together to help their neighbors with big projects, such as barn building or finishing quilts. The quilting bee was a social event that allowed the finishing of several quilts in a single day instead of weeks or months.

Naturally, early quilters did not limit themselves to designing only quilts of a single type or method. They used their imagination and ingenuity to combine patchwork, applique, and embroidery in endless combinations. One early variation was the Medallion quilt, a relatively simple design with dramatic impact, that was particularly popular through the early 1800s.

During the 1800s in many parts of the country there was a custom that a young girl make a baker's dozen of quilt tops before she became engaged. This collection consisted of 12 utility quilts, undoubtedly pieced, and 1 masterpiece quilt, which was either a pieced or applique quilt, for her bridal bed. After her engagement, she would take final steps to turn her tops into finished quilts. 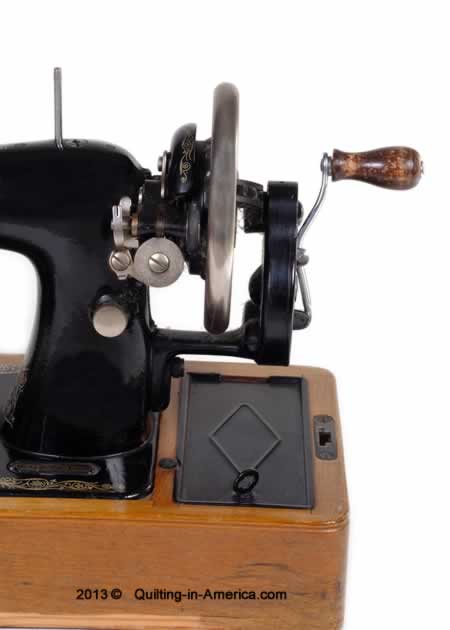 Another custom was for mothers to make several quilts for each of her children to have when they left home to start life as adults. A variation of this custom continues to this day as quilters continue to make heirloom quilts for their children or grandchildren.

In the mid 1800s the introduction of the sewing machine somewhat altered the dependence on hand-sewing. Long before electricity became common, quilters could power a sewing machine with a foot treadle or hand crank. The invention of a separate quilting attachment for the sewing machine by Henry Davis of Chicago did not seem to be widely used; hand quilting remained the favored method for nearly a century.

Much of the handwork involved in quilting may have been a form of relaxation for pioneer women, a relief from the drudgery and real labor of family life on the frontier. Additionally, fine handwork was a source of pride and status.

As the frontier was conquered, living conditions improved. With prosperity and the availability of more materials, quilts became less austere. Patchwork quilts were more likely to be made of new and finer fabrics. Appliqué quilts, which require more fabric, began to emerge and developed a body of traditional patterns. More and more women, particularly those in the upper-classes, had the time and resources to pursue more "genteel" arts. During this time the Victorian crazy quilt, became popular. By the early 1900s, quilting was transforming from a necessary art into a creative one.

When the United States entered World War 1 in 1917, quiltmaking became more important than ever. The U.S. government urged citizens to “Make Quilts – Save the Blankets for our Boys over There.” Quilts were made for fundraising and awareness building. The government took all the wool produced for commercial use in 1918 and instituted “heatless Mondays.” Following the war interest in quilting as an art was renewed.

During the Great Depression, people simply did not have the money to buy blankets so once again women relied on their own skills and resources to keep their families warm. Saving bits and pieces of material from clothing and other blankets, using material from feedsacks, and "making do" were common practices for frugal quilters during those difficult years. 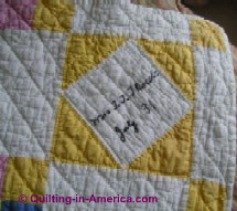 During World War 2, quilting was used to raise money to support the Red Cross. The “signature quilt” was especially popular. In a signature quilt, business people, store owners, and citizens of a community would pay a small fee to have their names embroidered on quilt blocks.

The blocks were sewn together and quilted, and the finished quilt was raffled off with all proceeds going to the Red Cross. These quilts are now fascinating community records.

Through the 1950s and 1960s, there was less general interest in quilting than at any other time in American history. To many, the quilt was associated with lean times and “making do” – quiltmaking was viewed as dated and old-fashioned. It was primarily older quilters, those who had always quilted, who kept the art of quiltmaking alive during this time.

Then in the 1970s and 1980s, the granddaughters of these older women began to revive interest in quiltmaking. The back-to-the-land movement, prompted by the anti-materialism of the late 1960s, generated a desire among many young people to learn hand skills that had been neglected in the postwar rush toward an automated society.

A milestone in American history, the Bicentennial celebration of 1976, was also a turning point in the history of quilts in America. The quilt became popular as a means of expressing national pride and achievement, and a powerful reminder of our past.

Now, in yet another century, quiltmaking in the early 2000s is still practiced as it always was, though now more for relaxation than out of necessity. Some quilters follow the craft in conventional form for leisure-time amusement or because it represents a tradition they find emotionally significant. Others have found in quiltmaking an artistic medium they can manipulate to their ends, and have ultimately created new styles and techniques.

The history of America can be seen in the history of quilts: in the rich heritage left us by those thrifty, self-sufficient women who helped settle this land, in the families whose history is sewn into quilts one patch at a time, and in the legacy of the quilting arts passed on to children and grandchildren so they may carry them forward to the future.

19th Century Women and Their Quilts